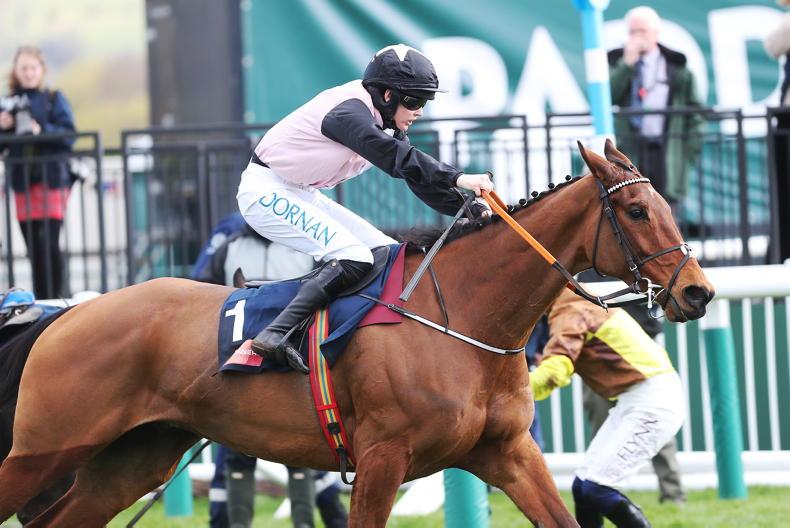 Bob Olinger and Rachael Blackmore take advantage of the last fences fall of Galopin Des Champs, with Paul Townend in the background \ carolinenorris.ie

SURELY even the most stony-hearted of observers must have been moved by the outcome of the first all-Irish race of the Festival as Galopin Des Champs and Paul Townend were robbed of a certain and spectacular victory as a result of a last-fence fall which gifted the four-runner affair to Bob Olinger.

In one of the most eagerly awaited clashes of the meeting, Galopin Des Champs turned in an all-star display that contained all the verve, class and brilliance that had characterised his first two appearances over fences at Leopardstown. The record books will show that victory belonged to Henry de Bromhead and Rachael Blackmore as the Robcour-owned Bob Olinger (6/5) made it back-to-back wins at this meeting, but with all due respect to the winning connections, this race was all about Galopin Des Champs.

The black six-year-old set out his stall from the outset by going to the front and there followed a series of spectacular if overly exuberant early jumps. There was one notable error on the final circuit but that aside, the Willie Mullins inmate was flawless and such was the pressure that he was exerting that Bob Olinger made mistakes five out and four out and looked out on his feet from before the turn in.

As the last fence loomed Galopin Des Champs was in splendid isolation. He met the fence on a perfect stride and cleared it superbly to universal approval but on landing exhilaration turned to dismay as he then knuckled over and came down. This left a weary Bob Olinger to come home 40 lengths clear of Busselton, with El Barra finishing a further 28 lengths back in third.

“We looked well beaten. I was surprised to see him off the bridle as early as he was and I didn’t think I’d ever see a horse do that to Bob Olinger,” reflected Henry de Bromhead. “You don’t like to win races like that and it was disappointing to see him off the bridle that early but Rachael said she wasn’t happy with Bob at all and we need to get him looked into. It sounds terrible saying this when we’ve won but there you go.”

Although robbed of victory Willie Mullins at least has the solace of looking ahead to the coming seasons with a horse who, in truth, could still be absolutely anything.

“We made the right choice going this trip and I’m thinking after that we could bring him back to two miles. He just needs to smarten up his jumping early on,” declared the trainer. “It’s just one of these things that happened at the end. He did everything right through the race. Paul said he landed properly and just slipped after landing.

“For a horse to balloon fences like he did early that takes a lot of energy out of a horse and I was wondering what he would have left at the end of the race but he just found another gear.”