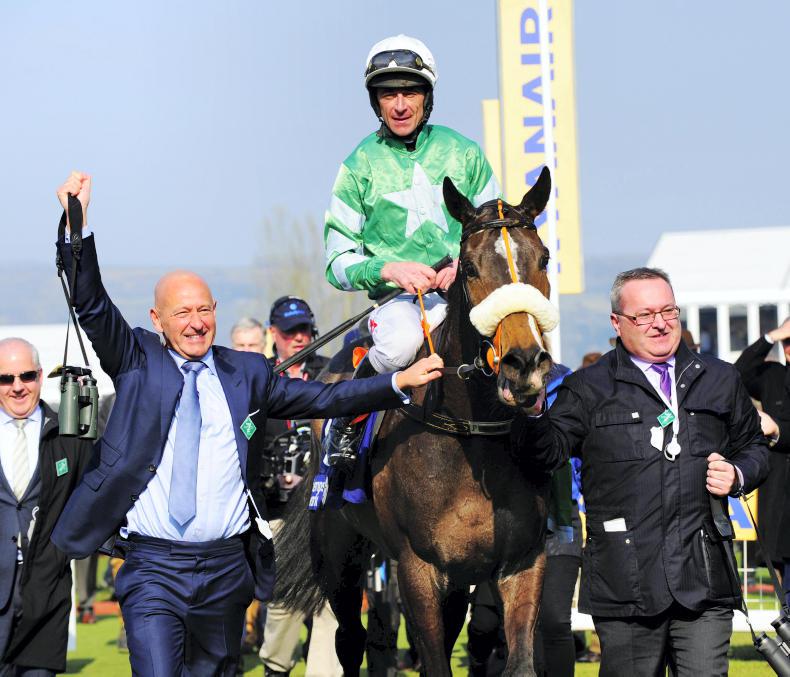 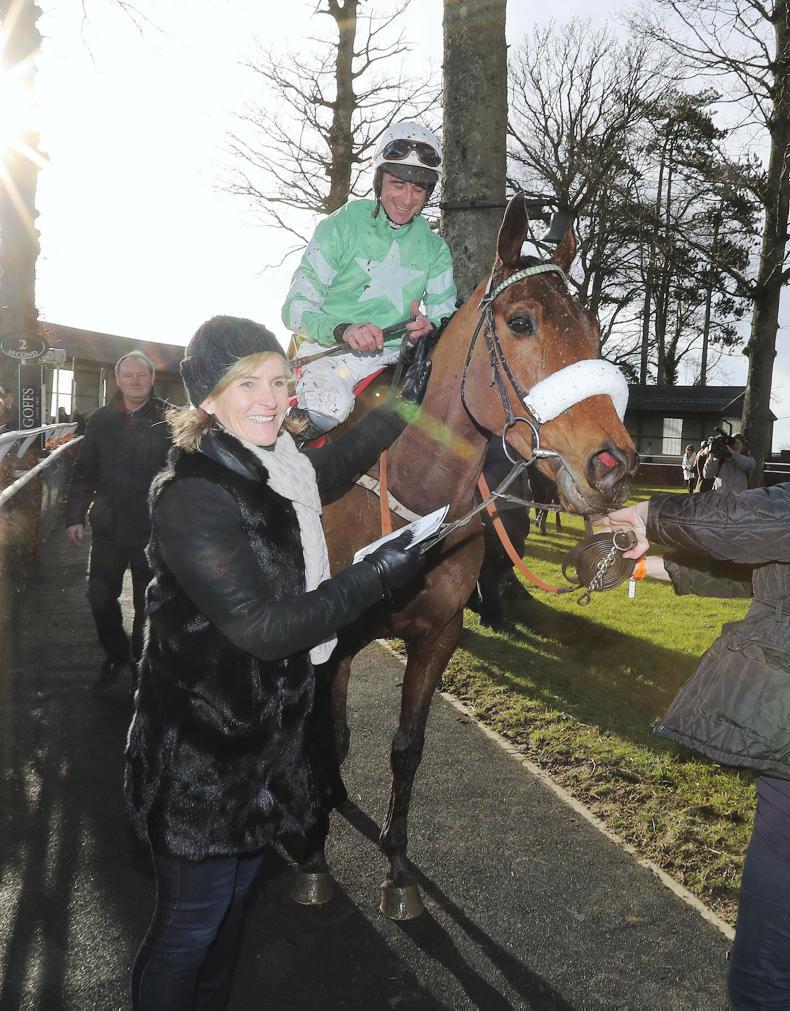 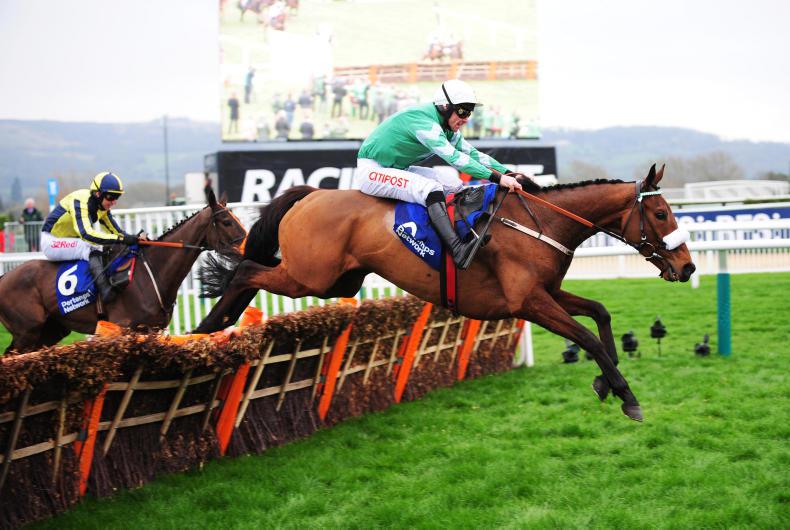 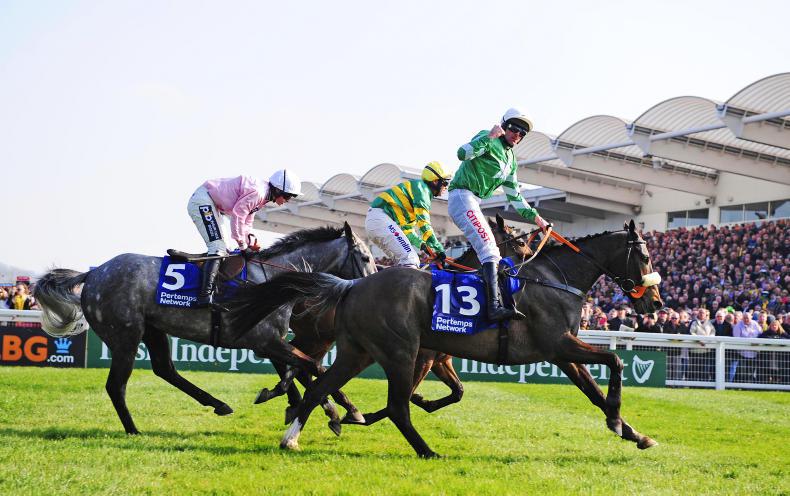 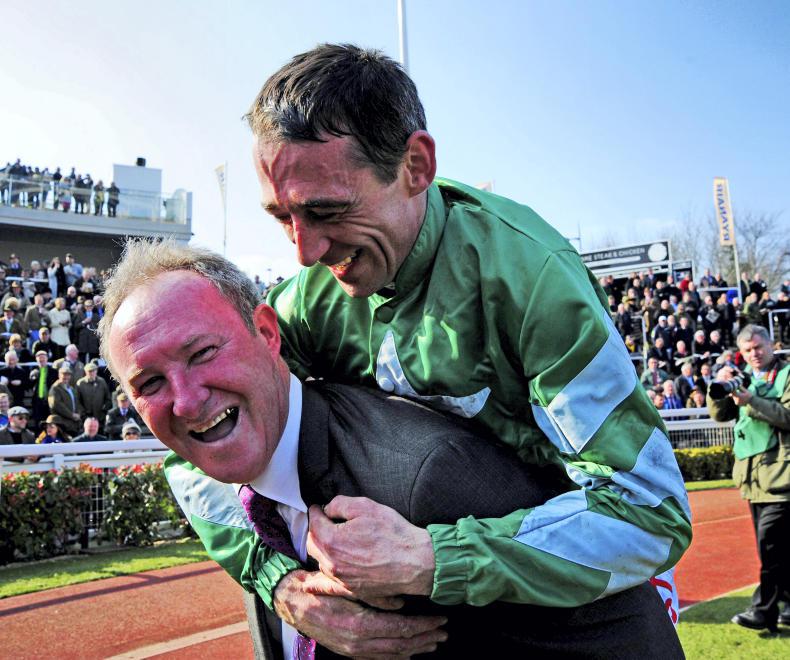 Pat Kelly and Davy Russell after their Cheltenham win with Mall Dini(WWW.HEALYRACING.IE) 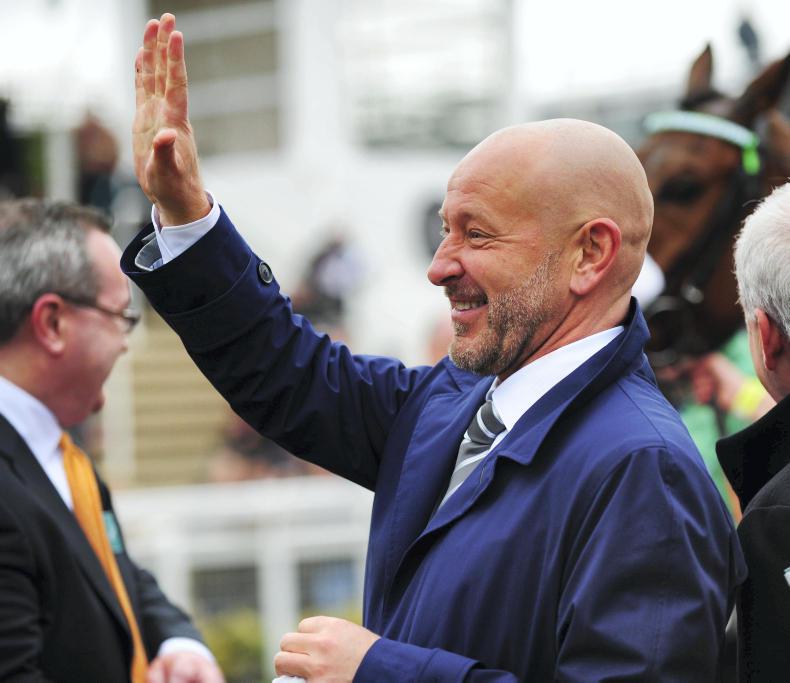 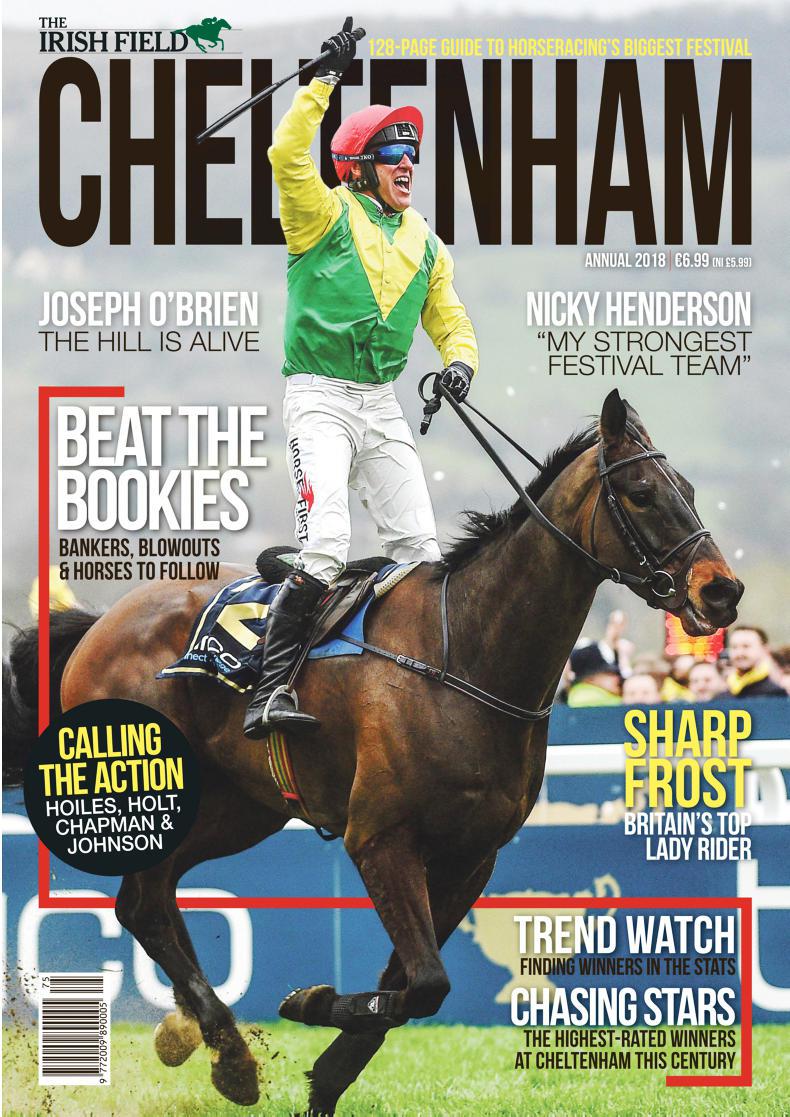 “I DON’T want to give up my Pertemps crown yet.”

Philip Reynolds is discussing his Cheltenham prospects and, for a man who agrees with the observation that his is “an overnight 20-year success story’’ in finding that Cheltenham winner, the hunger to win there again hasn’t gone away.

“It’s a bit like Willie (Mullins) when he was asked recently does he still have the same desire to win at Cheltenham after all his years of success. It’s 30 years since he took out his licence and he said something along the lines of that he didn’t even think of dreaming that he might have a winner in Cheltenham but might have one good enough to bring across.

“For me just to have one that’s good enough to compete there makes me genuinely thrilled. And to have had two Cheltenham winners in consecutive years – well! Having been christened Philip, ‘lover of horses’, it was inevitable that Reynolds would be seduced by the horse world. From Connemara ponies, holidays as a child to the Galway races when the family were taken by their late father, former Taoiseach Albert Reynolds, Philip has hunted, show jumped, bred and owned horses, the latter always being an ambition.

Joining the family business and now general manager of internationally trading pet food supplier C & D Foods in Longford, Reynolds started his ownership journey with the Crowleys from Pilltown, with a horse named Francis Street and a little known National Hunt trainer called Aidan O’Brien, “who later became A.P. when he started training posh flat horses! He was second first time out at the Galway Festival, ridden by Christy Roche and afterwards by two other greats, Charlie Swan and Richard Dunwoody,” explained Reynolds.

He knows all about the vagaries of owning racehorses especially in the National Hunt sphere: “That disappointment of building up hopes and knowing your horse didn’t perform. But most of all the sense of loss and self-blame when you lose a horse. No matter how hard I try I cannot treat it as a business. Horses are a thing of beauty, the most perfect athlete and to lose one suddenly when they are at their prime is heartbreaking."

A heart-breaking through joy might be an apt description for Reynolds’ state of being when on St Patrick’s Day 2016, after many years and many horses, Reynolds’ Mall Dini was produced in the form of his life by Galway trainer Pat Kelly to claim the Pertemps Handicap Hurdle (Final) at Cheltenham under Davy Russell. Philip’s wife Ann was in Birmingham airport on the way home when Mall Dini won, with her bags checked in, so to say his first Cheltenham win came as a surprise is an understatement. Reynolds had reached his nirvana.

Reynolds' great ally is the trainer of his two Cheltenham winners, Pat Kelly from Craughwell, who he regards as “a genius" with the absolute prerequisite for a handler of horses, patience.

Kelly and Reynolds had been friends for some time and Kelly bought Mall Dini from Tom Costello junior having worked for his father Tom.

After Mall Dini’s Cheltenham victory, Reynolds said: “And if it’s my last I don’t care now, I have achieved what I wanted to do.”

But human nature isn’t like that and back came the team last year. To observers it might seem that the result of the 2017 Pertemps Final was bordering on the fantastical but this time Reynolds was on the alert. His runner, Presenting Percy, in the green and white colours of the GAA club of the parish of Killoe outside his home town of Longford, came with a perfectly-timed run under that man Davy Russell again to lead over the final flight and win by three and three-quarter lengths at odds of 11/1.

And the man making fantasy reality was Pat Kelly again who had bought the horse from the same people, the Costellos. Reynolds had given his exciting purchase to his wife Ann.

From the start Reynolds was sure Presenting Percy was a good horse and Kelly took his time with the horse who kept on improving as the year went on, winning a couple of races and pleasing connections with his performances.

He was cherry-ripe for the Pertemps, having been a good winner over two miles, four furlongs at Fairyhouse in his previous race.

At Cheltenham, Presenting Percy crept into the race under a classic Russell ride and produced a winning burst to seal the deal.

“I have to admit I was always very content throughout the race. Davy Russell looked happy and I was happy. He travelled sweetly and jumped really well and, when Davy went looking for more cover again coming down the hill, I knew we were in business. It was a brilliant performance,’’ said the proud owner.

And now for this year.

Speaking last month after Mall Dini’s fifth in a two-mile, four-furlong novice chase at Punchestown in soft to heavy ground, Reynolds said: “That was plenty short for him. I’m not at all disappointed, it got him out and sharpened him up.’

“He could go again in the Kim Muir or also in the four-miler (National Hunt Challenge Cup Amateur Riders’ Novices’ Chase). We would be leaning more towards the four-miler."

Presenting Percy made a terrific start to his chasing career at Galway last October and impressed again at Fairyhouse in a staying handicap chase over three miles, five furlongs, looking an embryonic Grade 1 chaser.

In an unusual move, Pat Kelly and Reynolds ran Presenting Percy in the Grade 2 Galmoy Hurdle at Gowran Park on Thyestes Day. But an inspired choice it was as the seven-year-old won with ease in a race featuring some quality staying hurdlers. Davy Russell commented afterwards: “He oozes class, has a lot of talent. That was bottomless ground but he had his ears pricked over the last and bolted up. He’s just right for the RSA."

After the Galmoy, you could say that Percy has emerged as a Gold Cup runner for next year and Reynolds was understandably delighted: “Super, a nice opportunity for him. You don’t want to be pulling the guts out of a horse before he goes to Cheltenham. He jumped the last a fresh horse. After he won the Porterstown at Fairyhouse I thought is he truly a graded horse and now we know.’’

Most recently Presenting Percy returned to Gowran Park for the Grade 2 Red Mills Chase on February 17th for his Cheltenham warm-up where he finished a good second to Gold Cup fancy Our Duke. Presenting Percy is now the 5/2 clear favourite for the RSA Chase.

With two live Cheltenham prospects in his ownership, can Reynolds dare to dream of more of his horses winning up that hill?

He is unliklely to be represented in the 2018 Pertemps. His sole entry, Eagle Lion, is unlikely to make the cut. Tin Soldier and It's All Guesswork had been ear-marked for the race but their preparations did not go as planned.

After many years at the coalface of the racing game, Reynolds is philosophical:

“Success in horse racing is a journey not a destination. I have yet to buy a horse I thought could not succeed but it’s the spirit of being involved. As the saying goes: ‘Aim for the moon, if you miss you might hit a star.’

This article is taken from The Irish Field's Cheltenham 2018 magazine. The 128-page glossy is on sale in most good newsagents and it can be ordered HERE. 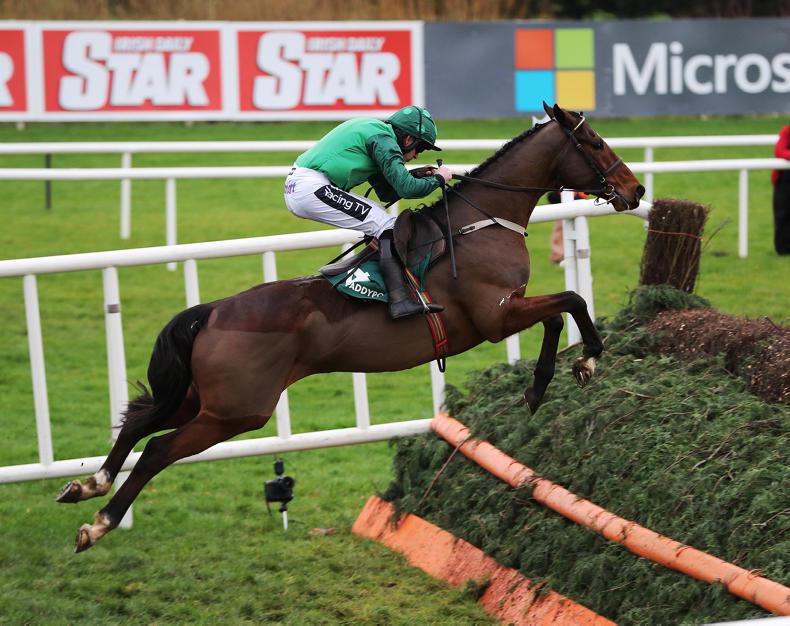 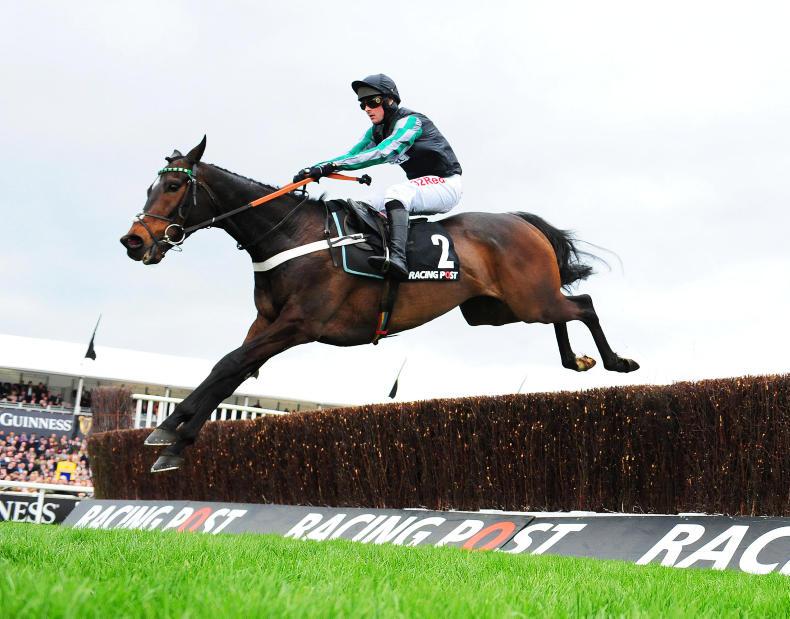 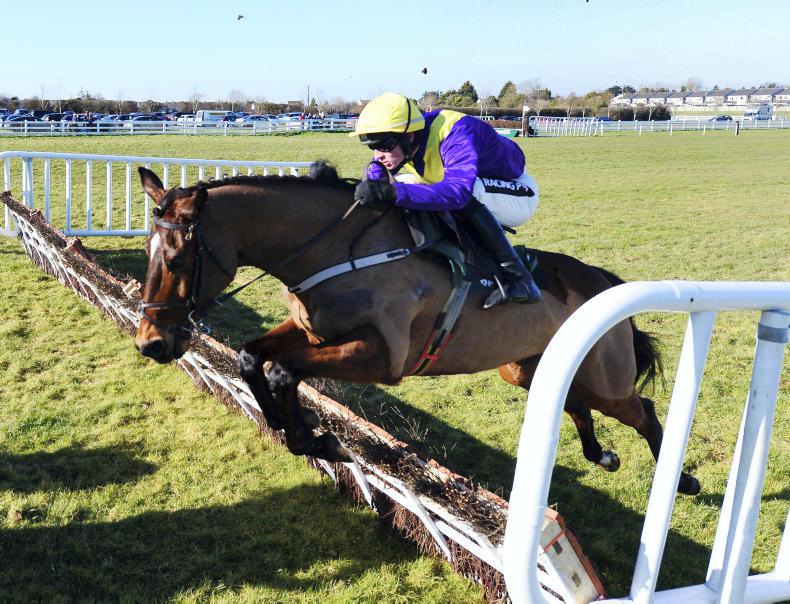 CHELTENHAM: Record Irish entry in Cheltenham handicaps
A total of 322 entries have been made by Irish trainers for the Festival 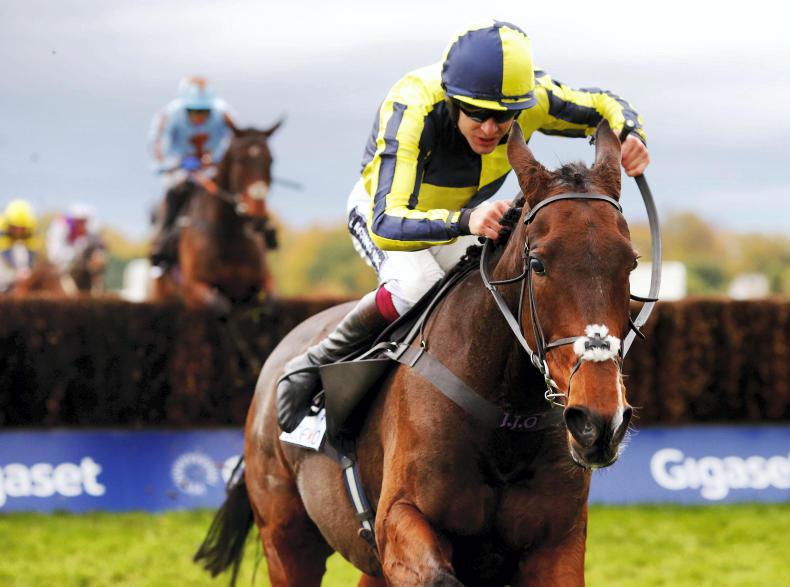 Irish Field Contributor
NEWS: A total of 897 Cheltenham Handicap entries revealed
A total of 897 entries are revealed today, including a record 322 from Ireland, for the 10 handicaps at the festival