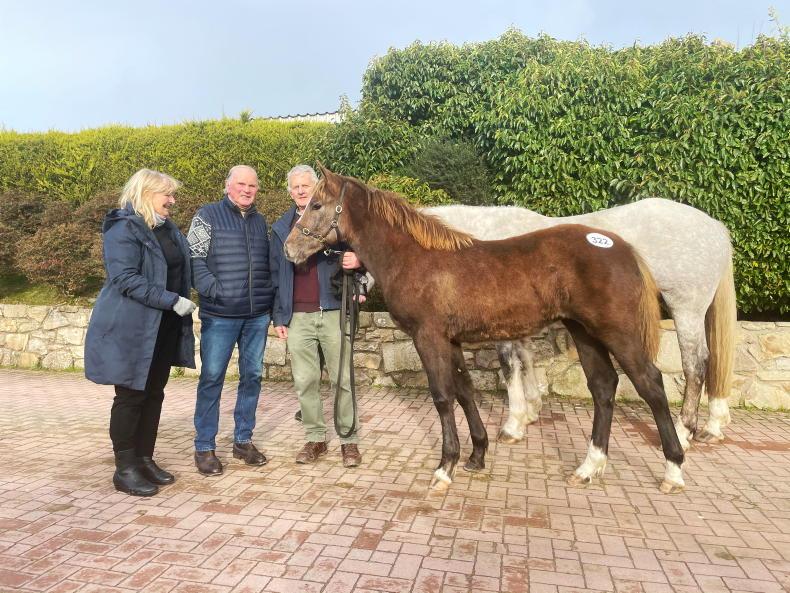 AS it did last year, the trade bucked up for the final day’s session of Irish Draught which closed with a 69% (71%) clearance together with an average of €2,744 (€2,890). In contrast to the previous day, the demand was at its strongest for the older mares, and one to especially appeal at €7,800 was Michael McDermott’s home-bred Calry Flash (Lot 363) a five-year-old mare by Fintan Himself out of Ballyrath Girl (Crosstown Dancer).

A proven hunter with the Sligo Harriers, she has several options open to her and is, according to successful buyer PJ Watson, “a fabulous type and model with a super foreleg and a great walk. Her grandam was a RDS champion, and I’m really looking forward to seeing her under saddle.” Watson, who is well-known in the Connemara world, but always with a client for a ‘good sort of any breed’ added: “I do think people are wanting something easy to produce these days, and of course if they buy a mare they can eventually breed from them which is important for our traditional lines.”

Edward Brogan’s unnamed (Lot 367) Class 1 RID daughter of Carrickrock Close Shave was another to sell well when she changed hands for €7,500. A 12-year-old, she is out of Springvale Countess (Castana) and a proven breeder of 10 foals, she is the dam of RDS reserve performance ID champion Patrickswell Sherry. Covered by Carragbeg Glengarriff ID, she is due to foal again in April.

Among the remaining Class 1 mares, Noel Boyle’s 13-year-old Killeen Judy (Lot 368) was secured by Graham Dunne at €6,100. A daughter of Huntingfield Rebel out of Killeen Glen (Glenlara), she is another prolific breeder, and is safely in foal to The Bachelor, a son of Fast Silver.

While the majority of the stock will remain in Ireland, John O’Donnell’s Beechwood Lady (Lot 366) will set sail to Wales with her successful buyer Alan Davies. A regular Irish Draught customer at the venue, Davies snapped up not only the mare but also accounted for her filly foal (Lot 335) by The Bachelor at €2,100.

“I originally came to just buy the foal, but the mare had tremendous bone, and so I’m buying into the bloodline,” he commented. “I like to breed old fashioned types, and I find that so many now are very light of bone.” The mare by the former RDS champion Cappa Cassanova is out of Sandyhill Dancer (Elm Hill) and is due to foal to the Class I, stallion, Hillviewfarm Superstar in May next year.

While the top prices all fell to the older stock, Michael Bailey’s filly Fuerty Susy (Lot 322) by the prolific show-winning sire Gortfree Lakeside Lad landed the top foal price €4,000. A winner and reserve champion at the National Show, she is out of out of Fuerty Lea (Welcome Emperor) and was secured by Donegal man Sean Carlin. Also selling well, and topping the colt foals at €3,500 was Brendan Duffy’s smart colt (Lot 349) by Casnova out of Ballagh Rose by Moylough Bouncer. Carrying a stout performance pedigree, the dam is a full sister to class 1 stallion DS Ballagh Bouncer, as well as to the prolific show and RDS champion broodmare DS Bounce With Me Baby.