Title: Cahir O'Sullivan: 'A gentleman full of integrity and fairness' 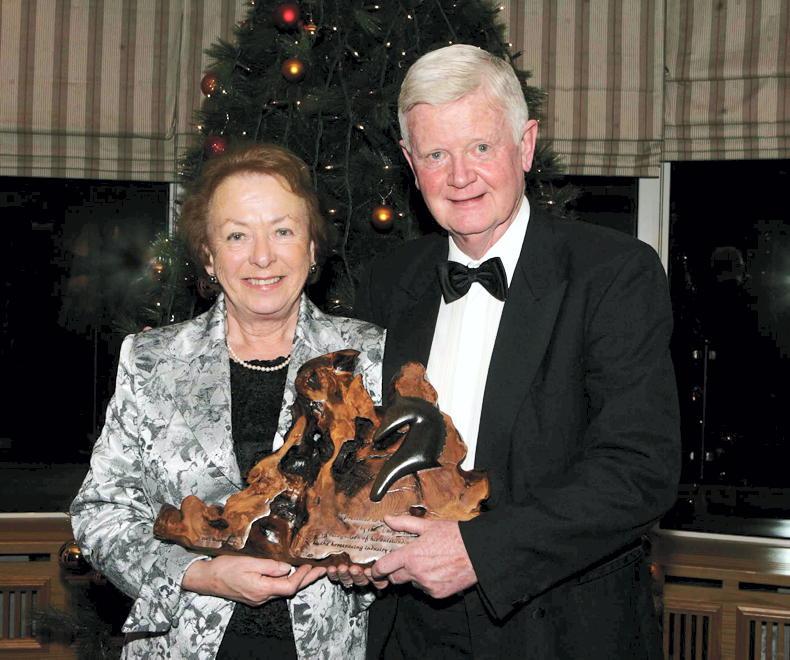 Cahir O'Sullivan is pictured here with his wife Gretta at the Moyglare Dinner in 2007 where he was honoured for his contribution to racing \ carolinenorris.ie

FORMER Turf Club chief executive Cahir O’Sullivan was laid to rest yesterday. Aged 86, he passed away on Tuesday having been in failing health since suffering a stroke some years ago.

From Co Louth, he qualified as an accountant and was working for a manufacturing company in Co Limerick when he applied for the job as Turf Club manager, or Keeper of the Matchbook, as the position was traditionally titled.

O’Sullivan held the position, which was effectively chief executive, until his retirement in 1999. He oversaw the introduction of many improvements to Irish racing, such as the computerisation of the Registry Office and the advent of the six-day entry system.

On one overseas trip in the 1980s, he was involved in securing Budweiser as Irish Derby sponsor and purchasing a new type of starting stalls which proved very successful.

It was O’Sullivan who negotiated the Turf Club’s move from Merrion Square in Dublin to the Curragh – a tricky task which involved convincing 30 staff to travel by train and bus every day.

The job was stressful at times and during his time in office the Turf Club fought High Court battles against Jim Bolger, Christy Roche and even a Tote customer who claimed the stewards had cost him a big payout.

Ann Whelan, who worked alongside O’Sullivan for many years, said: “Cahir was a gentleman, ‘gentle’ being the operative word, but as CEO he was a force to be reckoned with. He was always very grateful for anything you did for him. His passing marks the end of an era.”

He was made a member of the Turf Club in 2000 and of the Irish National Hunt Steeplechase Committee two years later.

O’Sullivan served on the Licensing, Appeals and Referrals and Compliance Committees. He was a steward of the Turf Club in 2005 and 2006, and was one of the Turf Club’s representatives on the board of Horse Racing Ireland from 2004 to 2007. During his time on the HRI board he acted as chairman of the Fixtures and Programmes Committee.

After stepping down from the HRI board, he continued to be an acting steward at the races, chairing the Punchestown stewarding panel.

Pre-deceased by his wife Gretta, he is survived by their children Jean, Yvonne, Richard and Gordon.

Brian Kavanagh, who was hired by O’Sullivan as the Turf Club’s financial controller and would succeed him in the role as Turf Club CEO, said: “Cahir was a great man to work with and to know. He had a passion for racing and was respected widely both in Ireland and internationally.

“Integrity and fairness were a given with Cahir, but what set him apart for me was his kindness and his ability to see the human side of any situation he was dealing with. He was a people person.

“I can still picture him vividly standing outside the old weigh room here at the Curragh, listening to “confessions” from all and sundry on a race day and then coming into work on the Monday with his racecard littered with notes and reminders.

“A tough negotiator, as anyone who had to sit across a table from him would testify, Cahir treated everybody the same way and was a passionate advocate for the Turf Club and its ethos of volunteerism.

“The late Pat Smullen summed him up perfectly in his recently published memoir when he described Cahir as “A great man, a very fair man, a hugely popular man who commanded so much respect.”

Denis Egan, who retired as CEO of the IHRB this year, commented: “Cahir was a true gentleman in every sense and a wonderful person. He was always someone you could go to for advice and what he said was invariably right even though sometimes you didn’t want to hear it! He was hugely respected by everyone and was a man of the highest integrity.

“He will be greatly missed by everyone in the Turf Club and the Irish National Hunt Steeplechase Committee as well as the many staff that worked with him down through the years. My deepest sympathies go to his family.”

Former INHSC Registrar Sean Barry added: “I worked with Cahir for 23 years and he was a gentleman to his fingertips. He was sincere, honest to a fault, and loyal to his staff. Whenever I meet former colleagues, the one person they always ask after is Cahir.

“He was a good judge, who made decisions based on the available information and for the greater good.”