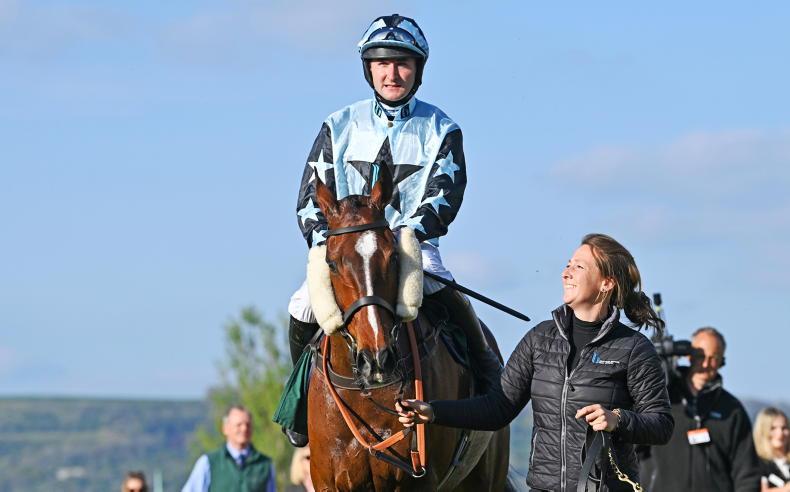 IT was hunters’ chase evening last Friday at Cheltenham where the seven races ranged in distance from an extended two miles to an extended four miles on the opening day of the 2022/2023 National Hunt season in Britain.

No rider managed to complete a double with Will Biddick landing the first, an open contest over an extended two miles, on the Chris Barber-trained Envoye Special. The 7/4 favourite, who was one of four French-breds to score, won by one and three-quarter lengths from the James King-partnered Envious Editor.

The seven-year-old was bred by Ellis’s mother Pippa out of her Midnight Legend mare Latenightdip and is thus a half-sister to their Randox Foxhunters’ Chase winner at Aintree, Latenightpass (by Passing Glance).

Co Galway-born Tommie O’Brien rewarded favourite backers in the KTDA open hunters’ chase when the Clive Boultbee-Brooks owned and trained Trio For Rio got up to beat the Biddick-partnered Moratorium by a length.

The winner, a nine-year-old Getaway gelding, was one of just two Irish-bred winners on the card, the other being Dandy Dan who gave first season rider Lauren Keen-Hawkins her first success on the track. The successful 2013 Midnight Legend gelding is the only horse trained by James Bourne.

Dairy farmer George Hiscock also recorded his first racecourse success when the Syd Hosie-trained Coup De Pinceau belied his odds of 100/1 in the extended four-mile open hunters’ chase. The 10-year-old Buck’s Boum gelding held off the challenge of the Dale Peters-partnered Law Of Gold by a neck.

Irish Thoroughbred Marketing sponsored the extended three-mile, one furlong mares’ hunters’ chase which went to the French-bred Feuille De Lune, who scored by nine and a half lengths as the 4/5 favourite. The seven-year-old Saddler Maker bay was ridden by Alice Stevens for trainer Kelly Morgan.

There was only one other hunters’ chase in the period under review, on Tuesday at Fakenham, where the three-mile race was won by the Izzie Marshall-ridden, Alan Hill-trained favourite, Normofthenorth, an eight-year-old Gold Well gelding.

Men’s championship comes to the boil

THINGS are really hotting up at the top of the men’s championship table with just a single success now separating the former multiple champion Will Biddick, who is on the 42-win mark, from the reigning champion, James King (41).

Biddick recorded two trebles over the Bank Holiday weekend, starting on Saturday at the Cattistocks’ new track at Chilfrome.

There he first landed the four-runner restricted over two and a half miles on the Myles Osborne-trained favourite Broomfields Cave, a five-year-old Court Cave gelding who, on his first British start, had won a maiden at Bonvilston last month for the Tom Ellis yard.

Biddick then walked over in the men’s open on the 2018 Albert Bartlett Hurdle (Grade 1) winner Kilbricken Storm, an 11-year-old Oscar gelding now trained by Charlotte Hawker, before bringing up his treble in the concluding four-runner conditions maiden on the favourite, Young William. Trained by Chris Barber, the six-year-old Yeats gelding was bred by Sandra Mayoh out of the Apple Tree mare Full Of Fruit.

Biddick was placed on both of his rides at South Hill on Sunday but resumed winning ways the following afternoon at Vauterhill, again for three different trainers. With two victories in Ireland, Will became the first British-based rider to record 500 wins between the flags with this treble.

First up, he won the two-runner men’s open on the 1/3 favourite, The Big Sting, a seven-year-old Scorpion gelding trained by Chris Barber.

Keith Cumings provided Biddick with his second winner of the afternoon in the following three-runner intermediate on the 4/7 favourite Don’t Ask Us, a nine-year-old Flemensfirth gelding, while he landed the four-runner mares’ maiden on another 4/7 shot, the French-bred Wise Garden who is trained by Danielle Kenealy.

King went into the weekend two wins ahead of his rival but dropped behind when riding only half the amount of winners, landing one each day.

On Saturday, he had just the one ride at the Quorn meeting in Garthorpe where, in the opening six-runner Level 2 conditions race, his mount Largy Mountain, an eight-year-old Yeats gelding trained by Francesca Poste, dead-heated with the Dale Peters-ridden and trained favourite, The Unmentionable, a year older Mustameet gelding.

On Sunday, King clashed with Biddick at South Hill where, unlike his rival, he did record a win, this coming in the five-runner eight-year-old and upwards Level 2 conditions race on the Luke Price-owned and trained Spencer Moon, a 14-year-old Dr Massini gelding.

Riding honours at this Devon & Somerset Staghounds’ fixture, where all six races were won by Irish-bred horses, went to Darren Edwards who initiated a treble in the six-runner maiden on the Dean Summersby-owned and trained Catch The Monarch, a five-year-old Imperial Monarch gelding who was having his first start in Britain.

The chesnut was previously trained here by Denis Ahern who bred him out of the Flemensfirth mare Catch The Class.

In the mixed open match, Edwards partnered the Nicola Martin-trained Sykes, a 13-year-old Mountain High gelding to a three and a quarter lengths victory over the favourite, Southfield Native, and comfortably landed the concluding three-runner restricted on the Summersby-trained seven-year-old Ask mare Ask The Lady, the 1/5 favourite.

On Monday, King’s travels took him to Llwyn Ddu, west Glamorgan where there were four Irish-bred winners on a poorly-filled six-race card.

Again joining forces with Luke Price at this Banwen point-to-point club meeting, he won the five-runner maiden conditions race on the six-year-old El Salvador gelding Hold Your Fort who was having his third start in Britain.

Previously trained here by Michael Murphy, the bay was bred by Philip Rothwell out of the Brian Boru mare Spirit Of Youth.

Back home in Wales for the day, Bradley Gibbs recorded his 30th success of the season when landing the six-runner men’s open on the even-money favourite, Financial Outcome, who initiated a double for his trainer, Oliver Brissenden.

The nine-year-old is by the Fruits Of Love stallion Financial Reward who is best-known as a sire of sport horses.

Brissenden completed his first double in the concluding six-runner maiden where former event rider Carys Morris partnered her own Port Jack to a length success over the James King-ridden Aracaras. Port Jack, a six-year-old Milan gelding who was winning on his fourth British start, failed to worry the judge on the track or between the flags here when trained by Philip Fenton. The bay was bred by Michael Fagan out of the Presenting mare, Coolure Lady.

Two of the best-supported meetings on the runners’ front over the weekend were on Bank Holiday Monday at Eyton-On-Severn and Mollington.

At the latter venue, five female riders won six of the seven races with Megan Fox recording a double on the Ben Pauling-trained pair of the US-bred Raven’s Tower in the seven-strong veteran horses’ conditions race and the eight-year-old Robin Des Pres gelding Special Buddy in the restricted where there were a similar number of runners.

Gina Andrews moved on to the 43-win mark for the season when landing the four-runner Level 2 conditions race on the 4/5 favourite Loughan, a seven-year-old Yeats gelding trained by her husband Tom Ellis.

Another 4/5 chance to score on the day was the Sarah Case-trained Lift Me Up who, on his second start, provided rider Hannah Henn with just her second success between the flags, the first coming just over six years ago.

The winner, a six-year-old Mahler gelding who was sourced through Martin Lynch, is out of the Bach mare I’ll Takeher Bach.

The bay made a bit of history on Monday as he is the first racehorse owned by former Spice Girl Geri Halliwell and her husband Christian Horner, the former driver and current principal of the Red Bull Formula 1 team.