Title: BRITAIN: Emotion gets the better of Rose 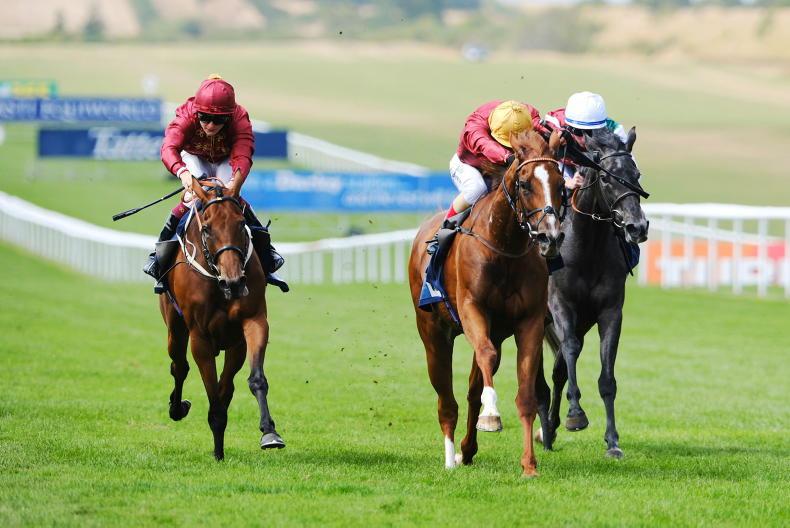 THE Listed Chalice Stakes at Newmarket on Saturday saw the finish dominated by the Qatar Racing silks, but it was the second colours which came to the fore as Emotion (John & Thady Gosden/Andrea Atzeni) stayed on better than favourite Rose Of Kildare (Charlie & Mark Johnston/Cieren Fallon) to win the mile-and-a-half contest by a length.

Emotion led early but Atzeni was content for Fallon to take on pacemaking duties after a couple of furlongs, and he brought his filly through to challenge again at the furlong marker, running out a narrow but ultimately decisive winner.

Given the runner-up had finished clear of the rest when second in a similar race here on her previous start, and is a former Musidora winner, this form looks quite strong for the grade, and the winner is unexposed and clearly progressive.

A 13/2 shot here having disappointed in the Height of Fashion Stakes and Goodwood and the Queen’s Vase at Royal Ascot, Emotion had made a big impression when winning a Kempton novice by a yawning 16 lengths in May.

She looked set to make her mark at a much higher level at Kempton, but she has taken a bit of time to fulfil the promise of that run, with Kevin Darley – representing the owners – trying to make sense of her uneven progress.

“With Emotion so easy at Kempton she didn’t really have a race and learn an awful lot,” said Darley.

“Being pitched in with a lot of runners at Ascot probably taught her more than we thought. I think maybe long term she could be a Galtres Stakes or Park Hill type filly. She’s a lovely big filly and there is plenty of her.”

There were also some notable performances by two-year-olds on the two day Newmarket card, one of the most notable being the Kingman filly Comissioning ridden by Frankie Dettori for John and Thady Gosden.

She came through to put her stamp on the opening two-year-old fillies’ maiden, winning by three and a half lengths.

Another Kingman filly, Laurel, this time a three-year-old in the Khalid Abdullah colours had also impressed at the track on the Friday evening, making a winning debut by three lengths again for the John and Thady Gosden yard.

Ebro bounces back in blinkers

THERE was listed action at Chester on Sunday, with Ebro River (Hugo Palmer/Ben Curtis) bouncing back to form in first-time blinkers to win the Queensferry Stakes by a length and three-quarters from Princess Shabnam (Sean Woods/Nicola Currie).

The 5/2 joint favourite’s task was made easier by several withdrawals, including that of 2020 and 2021 winner Judicial, but it was good to see last year’s Phoenix Stakes winner back on track after a few disappointments.

The winner bumped the weakening Hellomydarling as he came to win his race but didn’t improve his position in so doing.

He will step up in class again after this, with assistant trainer Colin Gorman suggesting he may take his chance in the Nunthorpe granted easy ground, which appears very important to him.

THERE was and Irish-trained winner at Musselburgh on Friday evening when Kevin Coleman’s good servant Only Spoofing won the five-furlong Donaldson Timber Engineering Handicap worth over £9,000 to the winner.

The gelding was ridden by Shane Gray and was always prominent, hitting the front before the furlong pole to hold on by a length and three-quarters at odds of 5/1.