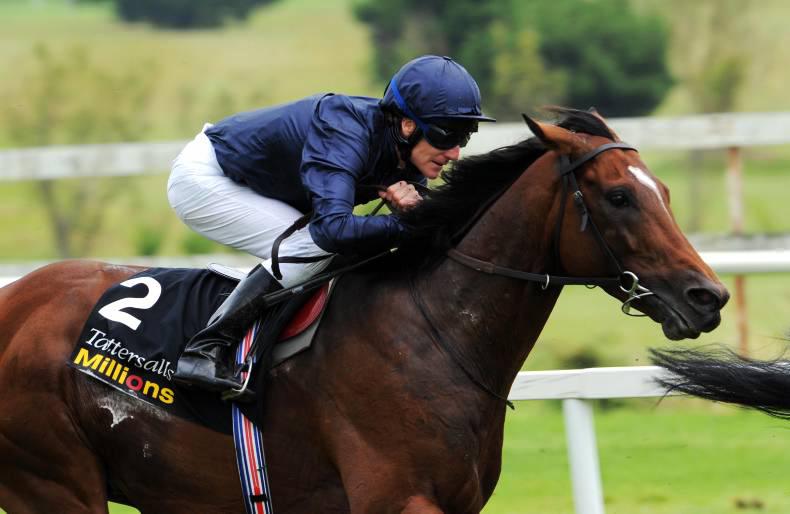 Trained by Tony Martin and bred by Stone Electrical Ltd, the Grade 1 star is out of Dainty Daisy (by Buckskin), he has a couple of winning siblings, and his bumper-winning dam is out of Winning Nora (by Northfields). That mare won twice on the flat, her six wins over hurdles included a listed contest at Tralee, and in addition to winning three over fences she was placed in races such as the Kerry National and Galway Plate.

Dedigout is a son of the late Burgage Stud stallion Bob Back (by Roberto).

Rawnaq: A dual flat and triple hurdles scorer, this eight-year-old son of the late Gilltown Stud classic sire Azamour (by Night Shift) won the Grade 2 Flyingbolt Novice Chase over two miles, one furlong at Navan on Sunday. He has now won two of his three starts over fences.

He is trained by Matthew Smith, he was bred by Jim Monaghan, and he is a half-brother to the blacktype placed dual hurdles winner Shamiran (by Polish Precedent). His dam Sharemata (by Doyoun) is out of a half-sister to the dual Derby hero Shahrastani (by Nijinsky).

Very Wood: A Grade 1 star over hurdles, he made it two from four over fences with victory today in the Grade 2 Ten Up Novice Chase over three miles at Navan.

The Noel Meade-trained six-year-old was bred by the partnership of Catherine Jacquemont, Jean-Paul Gronfier, and Antoine Gronfier. He is out of Ball Of Wood (by Cadoudal), his four-year-old half-sister Ball In Wood (by Dom Alco) finished third over hurdles at Pau a month ago, and he comes from the family of the Group 1 Prix de Diane (French Oaks) heroine Bright Sky (by Wolfhound).

Champagne Fever: An eight-year-old son of the late Whytemount Stud stallion Stowaway (by Slip Anchor), the grey won the Grade 2 Red Mills Chase over two and a half miles at Gowran Park on Saturday. This is a second Grade 2 success over fences for the Willie Mullins-trained gelding, adding to a pair of Grade 1s in bumpers and another pair of Grade 1 wins over hurdles.

He was bred by John Cahill, he is out of Forever Bubbles (by Roselier), and he is a half-brother to the ill-fated blacktype placed dual chase scorer Presenting Forever (by Presenting). He comes from the family of high-class performers such as Belmont King (by Kemal), The Bajan Bandit (by Commanche Run), Therealbandit (by Torus), and Andy Pandy (by Garland Knight).

Kitten Rock: The Edward O'Grady-trained five-year-old took his record to six wins from eight starts over obstacles when easily winning the Grade 2 Red Mills Trial Hurdle over two miles at Gowran Park on Saturday, a third graded victory for the French-born gelding.

He was bred by the partnership of G.A.E.C. De La Seguegne and J Campos, he is out of The Cat Eater (by Tagel), and his siblings include Volo Cat (by Volochine), a hurdles winner who was Listed placed over eight and 12 furlongs on the flat. His dam is a winning full-sister to the stakes placed multiple flat scorer Tagelovich.

Balder Succes: The Alan King-trained seven-year-old is now a dual winner at the highest level following his victory in the Grade 1 Betfair Ascot Chase over two miles, five and a half furlongs at Ascot on Saturday.

He was bred by Damien Bellanger and partners, he is the first foal out of Frija Eria (by Kadalko), and he comes from the family of the blacktype winning French chasers Talego (by Tyrant) and Taraga (by Ermitage).

Balder Succes is a son of Goldneyev (by Nureyev), sire of the high-class miler Gold Away and sprinter Dananeyev, and a former member of the team at Haras de Mirande in France. He died in 2010.

Ainsi Fideles: The David Pipe-trained five-year-old, a son of Haras de Fresnay le Buffard's dual Derby winner Dream Well (by Sadler's Wells), notched up his first blacktype success in the Grade 2 racinguk.com Reynoldstown Novices' Chase over three miles at Ascot on Saturday. He has won six of his seven starts over fences.

The chesnut was bred by Pierre de Maleissye Melun and partners, he is out of Loya Lescribaa (by Robin Des Champs), and he is a half-brother to the listed hurdle winner Sametegal (by Saint Des Saints).

Closing Ceremony: A son of the Beeches Stud sire Flemensfirth (by Alleged), the Emma Lavelle-trained six-year-old won the Grade 2 Betfred “Still Treble Odds On Lucky 15's” Hurdle (registered as the Rendlesham Hurdle) over three miles at Haydock on Saturday.

He was bred by Margaret Tracey, he is out of Supreme Von Pres (by Presenting), and he is a full-brother to the blacktype placed dual chase and dual hurdles scorer Highland Lodge. He is a €51,000 graduate of the Goffs Landrover Sale, and there are National Hunt blacktype horses to be found in each of the next three generations of his family.

Lie Forrit: A listed winner over hurdles several years ago, the Lucinda Russell-trained 11-year-old is now a blacktype scorer over fences too folowing his victory in the Grade 3 Betfred Grand National Trial over three miles, five furlongs at Haydock on Saturday.

He was bred by Niall McGrady, he is out of Ben Roselier (by Beneficial), and he is a half-brother to the hurdle and triple chase-winning mare Janal (by Taipan). His grandam is a half-sister to the prolific Glemot (by Strong Gale) who won 14 times over fences.

Lie Forrit is a son of the Grade 1 winner and Knockhouse Stud stallion Subtle Power (by Sadler's Wells).

He is trained by Brian Ellison, was bred by James Keegan, and he is a half-brother to the blacktype winning stayer Heaney (by Flemensfirth). The Red Wench (by Aahsaylad), who is his dam, is a half-sister to the listed hurdles scorer Noels Dancer (by Nordance) and to the blacktype placed Nordic Prince (by Nordance), a pair that won 21 National Hunt races between them.

Holy Roman Emperor: Coolmore Stud's classic sire notched up another big race success in the southern hemisphere when Mongolian Khan won the Group 2 Essilor New Zealand Avondale 3yo Guineas over 10 and a half furlongs at Ellerslie on Saturday.

The Grenville Stud-bred colt, who is trained by Murray Baker and Andrew Forsman, also won the Group 2 Waikato Guineas over 10 furlongs at Te Rapa two weeks ago. The grandson of Danehill (by Danzig) is out of Centafit (by Centaine) and so is a half-brother to the Group 1 winning stayer Young Centaur (by Jeune).

The filly was bred by the partnership of Monovale Holdings Ltd and Graeme Rogerson, and she is trained by Graeme and Debbie Rogerson. She is a half-sister to the Group 1 placed gelding Manten (by Encosta De Lago) and she is out of the dual stakes winning sprinter Dazzling Belle (by Desert Sun).

Starspangledbanner: The son of Choisir (by Danehill Dancer) notched up another stakes winner when Of The Brave won the Group 3 Sportingbet Blue Diamond Prelude over five and a half furlongs at Caulfield on Saturday.

The Mark Riley-trained juvenile was bred by Saconi Thoroughbreds, he is out of Runaway Jesse (by Rory's Jester) and that makes him a closer then half-brother to the dual pattern winning sprinter Eloping (by Choisir) and to the Group 2 placed Jesse's Girl (by Choisir).

Contributer: A dual 10 furlong listed scorer in England last year, the son of High Chaparral (by Sadler's Wells) is now a dual pattern winner in Australia, adding Saturday's Group 2 Optus Apollo Stakes, over seven furlongs at Randwick, to the 10 furlong Group 3 contest he collected at Caulfield in October.

The five-year-old was bred by Petra Bloodstock Agency Ltd, he is trained by John O'Shea and owned by Godolphin. His dam Serisia (by Exit To Nowhere) won the Group 3 Prix de Psyche, she is a half-sister to the pattern placed seven furlong stakes winner Mayyadah (by Invincible Spirit), and his grandam Seralia (by Royal Academy) is a stakes winning half-sister to the Group 1 scorer Shaka (by Exit To Nowhere).