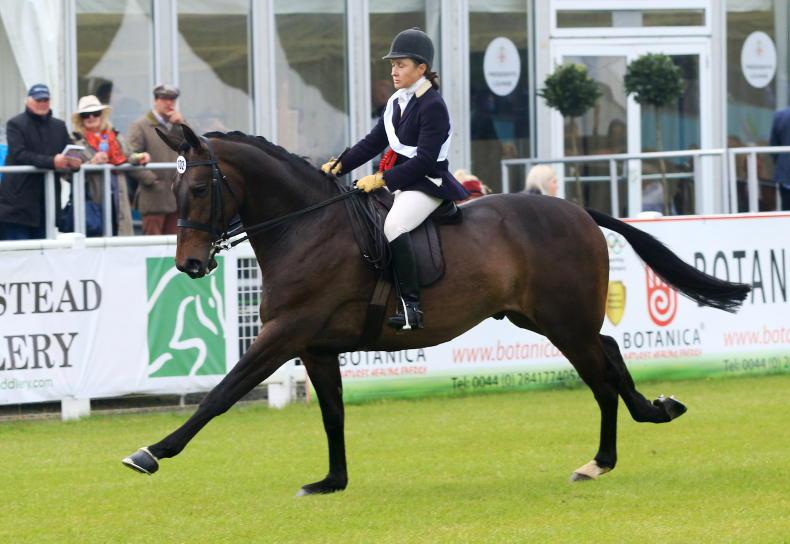 The Co Kildare rider/producer purchased the bay as a two-year-old from P.J. Shanahan who bred him at The Furze Stud in Co Tipperary out of the Shareef mare Red Clover who he bought as a foal in Goresbridge.

“I broke him last autumn and was happy to sell him to Sue when she contacted me shortly afterwards,” said Perrin. “He will move to Yorkshire after Dublin and then Leon King will take over the ride. I brought him to the league they ran in Killossery and rode him around CoilÓg a few times during jumping shows. His first time on grass was at Thomastown. I was delighted with him yesterday (in class) and today as he really carried me and has grown up a lot.”

The reserve supreme champion was the Karen King-owned and bred My Diamond Solitaire who earlier won the middleweight title under Jamie Smyth. This five-year-old Balief Guy gelding, who was crowned working hunter champion on Friday, came to Balmoral on the back of a very successful outing to the Northern Ireland Festival last month.

There was a bit of a turn-up in the heavyweight championship when last year’s supreme champion, the Daphne Tierney-owned, Jane Bradbury-ridden five-year-old OBOS Quality 004 gelding Bloomfield Distinction was placed reserve by judges Beanie Sturgis and Vincent Seddon to Shane McKenna’s Mongorry Cormac. The pair had finished in the reverse order in their class on Wednesday.

In winning this title, the Irish Draught gelding was repaying McKenna as it from this chesnut that the Kilkenny-based producer had fallen due to a slipped saddle at the Glandoran Island summer show and had shattered his talus bone. Mongorry Cormac, who was second in his flat breed class to the subsequent champion, was bred out of her Donovan mare Hollyhill Classic by Donegal’s Jill Earls who travels to support the gelding each time he is shown.”

The supreme champion and the reserve are now qualified for the Connolly’s Red Mills champion of champions final at Tattersalls July Show.