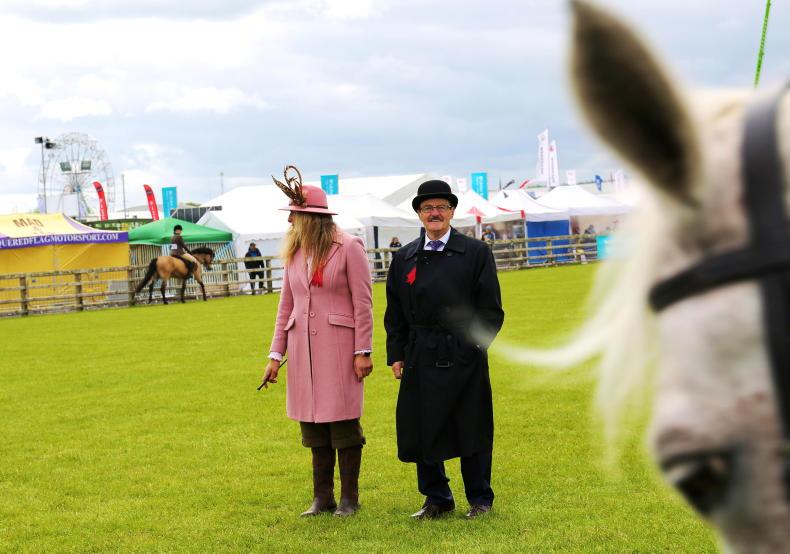 THERE has been huge growth, and interest, in the North Down Marquees Connemara section at Balmoral Show where, last Thursday, judges Cathy Snow and Robbie Fallon were very impressed with the number and standard of pony who came before them throughout the day.

The morning session was devoted to the flat and, to her great delight, Co Kildare’s Sadhbh O’Connor fulfilled an ambition of adding a class win at Balmoral (in that for ponies six-year-olds or over with riders 10 years old and over) to those at Dublin and Clifden before landing the ridden championship on her mother Aoife’s Ballylee Castle Prince.

An 11-year-old Slackport Prince gelding, who was bred in Co Galway by Declan O’Flynn out of the Finisglen Joey mare Killoughter Jug, the grey was purchased as a three-year-old by the O’Connors and is said to have a home for life, although Sadhbh may not be around to ride him much in the future.

“I hope to start studying equine veterinary nursing at Hartpury College in September and I suppose my mum will start riding him then,” said the 19-year-old. “I took this year out so I could concentrate on the horses as they will definitely be taking a back seat once college starts. I love coming here to Balmoral as I think it’s a very good show and so well organised.”

O’Connor had a good few days at Balmoral Park as she finished second in the 153 show hunter class on Imperial High Tide on whom she won the show hunter championship last September.

The reserve sash in the ridden Connemara championship was presented to Co Tipperary’s Aoife Flynn who stayed in the P&O arena for the final judging following her success in the young riders’ class on Fiery Diplomat, a nine-year-old Gleann Rua Maxwell gelding who is out of the Gun Smoke mare, Magic Minnie.

The grey, whose substantial bone was admired by the judges, is owned by the rider’s mother Rachel who was on hand to support her daughter, along with husband John and sons Liam (12) and James (seven). Fourteen-year-old Aoife was making her Balmoral debut on Fiery Diplomat who the family purchased last August.

The class for four and five-year-olds was won by the Grace Maxwell Murphy-owned and ridden Glencarrig Princess Ella, a 2017 Glencarrig Knight mare who was third in the same class last September, while Castlewellan exhibitor Penny Campbell always topped the line-up in the in-hand mare class with her Dooneen Supermatch mare, Beechmount Lulu.

Robbie Fallon returned to the P&O Arena in the afternoon to judge phase two of the working hunter championship with Cathy Snow moving over to Arena 1 to assess the ponies’ performances over the Adrienne Stuart-designed track.

There’s little more that can be said about the 2022 champion, the evergreen Blackwood Fernando who, at 25 years of age, is still holding off his younger rivals in the capable hands of Alicia Devlin Byrne who rides the grey for her mother Claire Devlin.

The Ferdia gelding, whose catalogue number was earlier called out to stand first in the class for ponies aged four-year-olds and upwards and riders aged 16 or more, was bred by Patrick McNamara out of the Mervyn Pookhaun mare Dancing Queen.

Emily Marnane partnered her mother Melanie’s Danny’s Pride to first win the young riders’ class and then stand reserve on the 13-year-old Fernville Danny gelding who has recorded many victories for the Co Tipperary family.

Later in the day, Blackwood Fernando continued to defy his age by putting on another excellent display for his large fan club when winning the Clifden high performance qualifier.