From six rides, Ian Cassells landed a double of wins at Ballindenisk International 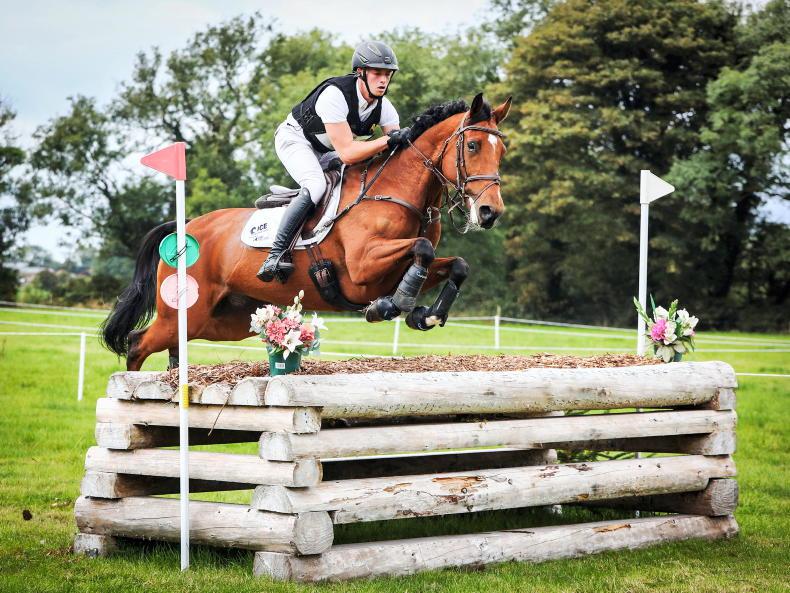 IAN Cassells rode six horses at last week’s Ballindenisk international horse trials so it was little surprise to learn that Leanne Foster, who works at his Newcastle, Co Dublin yard, won the groom of the weekend award.

With help from Alannah Kelly, Foster was kept very busy during all three phases of the ARK Equine CCI3*-S, as Cassells rode four horses in this 30-runner class (see photo page 115). With 1.2 cross-country time penalties, he finished 14th on Mr Obos Hullabaloo (33.9) while, with double clears inside the time, he won on Shanbo Super Flex (28.3), was third on Rosconnell Alto (28.5) and slotted into fourth with Brookwood Supersable (30.4).

“I think a lot of the winner who could be a proper one,” said Cassells of owner/breeder Frances Corkery’s traditionally bred Shanbo Super Flex, an eight-year-old Flex A Bill half-sister to the Master Imp mare Shanbo Queen B (CIC3*). I started competing her in EI100 classes in July last year and finished the season winning the EI115 for seven and eight-year-olds at Punchestown. This year she won two EI115s and I can see her making up into a top-class horse with a bit of time.”

Gerry and Fiona Leahy’s Rosconnell Alto, who won the CCI3*-S at Millstreet last month, has been a model of consistency all season as has Pat Duffy’s home-bred Brookwood Supersable, who was second in a similar class here at Ballindenisk in late April. At time of writing, Cassells was very much hoping that both would be selected for the CCI3*-L for seven-year-olds at the FEI world breeding championships for young event horses at Le Lion d’Angers later this month.

Completing on the same score as Cassells and Shanbo Super Flex, Co Meath’s Sarah Ennis had to settle for second place with her husband Niki Potterton and Wendy Harris’s Dourough Ferro Class Act who had a fence down show jumping. This seven-year-old gelding by S Creevagh Ferro, who led after dressage on 24.3, is another who could be heading to France.

Cassells brought up a double when landing the 28-strong Horse Sport Ireland CCI2*-S on the Leahys’ BDE Olympic Royale, a six-year-old Orestus mare who completed on her dressage score of 26.2.

Britain’s Sam Ecroyd was second on the eight-year-old ISH gelding Knocksharrys Dream (28.6), who won the flatwork phase but had a fence down show jumping, while Co Kilkenny-based British international Nicky Roncoroni, was third with her own six-year-old Capri Van Overis gelding Henry Higgins (29.7), one of six horses in the class to jump a double clear inside the time.

“This is a really nice mare,” Cassells said of his winner. “She has been very consistent since I got her, recording some good results, and would make an ideal amateur, Junior or Young Rider horse.

“The going was very good with a bit of a cut in it and it was great to see that the fences on the cross-country courses had been beefed up a bit. I’ve horses entered at Grove on Sunday and then I’m heading to Boekelo and, hopefully, Le Lion.”