Title: BAHRAIN INTERNATIONAL TROPHY: A race on the up and up 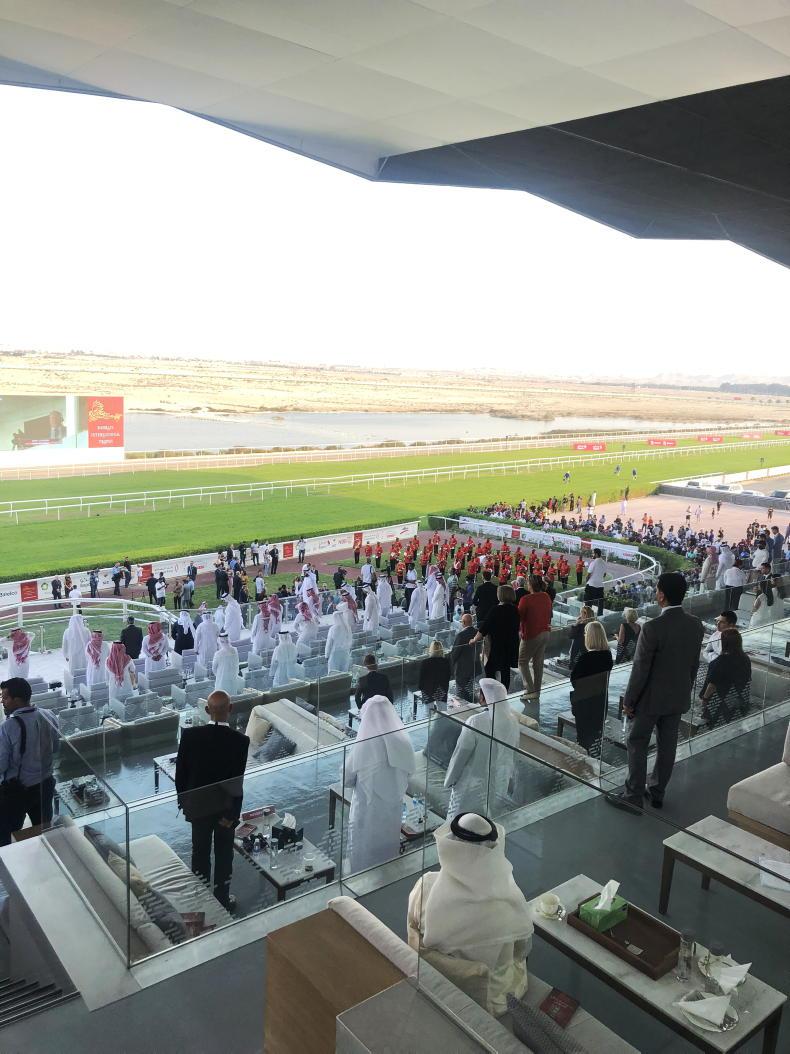 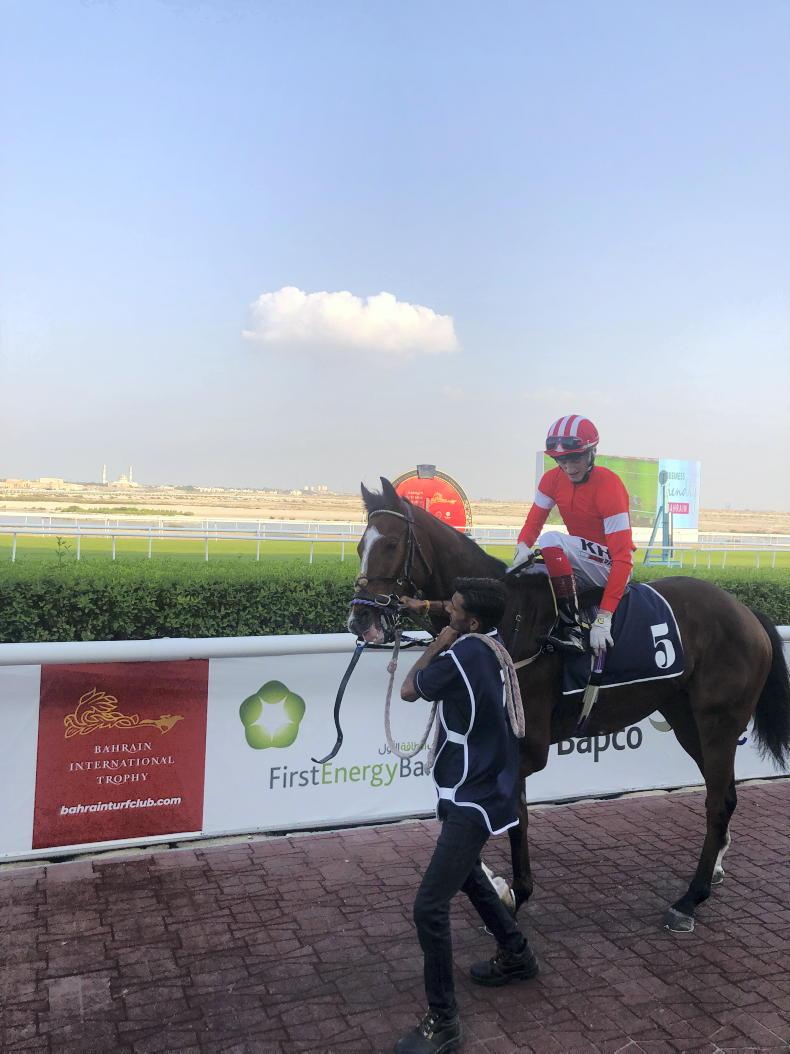 RUN over 10 furlongs on turf, in just its third year the £500,000 (€580,000) Bahrain International Trophy has come of age, buoyed by the fact that the race has been designated Group 3 status internationally. Given the improving quality of the fields for each renewal, it is only a matter of time before it will gain further elevation.

While the race is to the forefront of this week in Bahrain, an island with a population of about 1.65 million, there is another reason why attracting an international field and their entourage is important. Events such as these place the country firmly in the minds of people, and they hope to encourage more visitors to this welcoming place.

I have been fortunate to race in 14 different countries around the globe, but it is hard to beat the friendly welcome of the people of Bahrain. In these worrying times for everyone, and especially in light of a rapid worsening of pandemic cases, visitors to Bahrain are afforded every safe protocol.

One of the best vaccinated nations in the world, and now well advanced when it comes to booster vaccines, all people entering Bahrain must take a Covid test on arrival. For people who stay for longer, you have to take a test on days five and 10 too.

There was a large presence of international visitors to Bahrain this week, the hospitality of the hosts a temptation that was impossible to resist. The Irish challenger Cadillac, ridden by Shane Foley, was accompanied by Patrick Cooper, while Jessica Harrington’s daughter Emma and husband Richie Galway were also present.

Weatherbys Ireland’s Sharon O’Regan, a regular visitor to the area as they supply much of the technology and more to the Rashid Equestrian and Horseracing Club, was accompanied by the group’s chief executive Russell Ferris.

Irish-breds are flying the flag

DARK Shadow, bred by Jimmy Murphy at Redpender Stud, finally broke his duck in Bahrain when he was a decisive winner of the Bahrain Petroleum Company Cup, a race that carries much prestige in the region and is a local Group 3.

While this was a first win since being imported, the five-year-old son of Dark Angel (Acclamation) won four times when trained by Clive Cox, before being sold for 55,000gns as a three-year-old at Tattersalls. It was at their sister company in Ireland that Murphy sold him as a yearling for €50,000.

Dark Angel is the sole winner to date for Djinni, a winning daughter of Invincible Spirit (Green Desert) and from the family of champion two- and three-year-old Grand Lodge.

The only filly in the field for the valuable handicap on the card, Sonja Henie was given a fine ride by John Egan to land the mile race, the Irish-bred winner beating another Irish-bred, Beauchamp Bagenal in the process. Bred by Damian Burns’ Diomed Bloodstock and sold from Lodge Park Stud for €58,000 at Goffs as a yearling, Sonja Henie is a half-sister to another star in the region, Port Lions (Kodiac).

A daughter of Exceed And Excel (Danehill), Sonja Henie won for Marco Botti and David Loughnane in England before she was purchased by Oliver St Lawrence for 60,000gns at the Tattersalls December Sale two years ago. She is one of six winners from the US stakes winner Cold Cold Woman (Machiavellian).

Ten up for local favourite

ONLY four runners lined up for the Batelco Cup yesterday, two trained by James Naylor. In an exciting finish, it was local favourite Saheel who prevailed by a diminishing distance, having made all of the running. It was victory number four of the year, and the 10th in all, for the five-year-old daughter of Swiss Spirit (Invincible Spirit).

The race is locally rated a Group 3, though this confers no blacktype, and is for horses bred in the region. The mare races for, and was bred by, the honorary president of the Rashid Equestrian & Horseracing Club, H.H. Shaikh Abdullah Bin Isa Bin Salman Al Khalifa.

Most effective over five furlongs, which suits her blistering speed, this win was over six and Saheel was purchased in utero when Oliver St Lawrence paid 11,000gns at Tattersalls for her dam Rhagori Aur, a daughter of Exceed And Excel (Danehill). In fact, the bloodstock agent also bought Rhagori Aur as a yearling, for 18,000gns, and she won three times as a two-year-old when trained by Bryan Smart.

History of racing in Bahrain

HORSES have always been part of Bahraini culture. A unique collection of purebred Arabian horses has been preserved on the island for over 200 years by the rulers of Bahrain.

Historically, racing was conducted at private meetings and all horses were Arabians. In 1948, a committee was formed to have horse racing conducted under one umbrella. With the support of the Bahraini royal family, which endures today, racing prospered, and in 1977 the Amir of Bahrain issued a decree to establish the Rashid Equestrian and Horseracing Club (REHC) as the only racing authority in the state.

REHC is recognised internationally as the governing body for horse racing in Bahrain. It administers all aspects of the sport, including the rules of racing, the registration of horses, the licensing of jockeys, officials and stable personnel, and administers the internationally approved Stud Book. REHC is a member of the International Federation of Horseracing Authorities and the Asian Racing Federation.

With the establishment of REHC, and with keen interest from and the support of the royal family and the people of Bahrain, racing has grown from a small track and stand in the capital Manama to Riffa, in the first instance, and then to the present site in Raffa in 1981. The sole racecourse is named Sakhir.