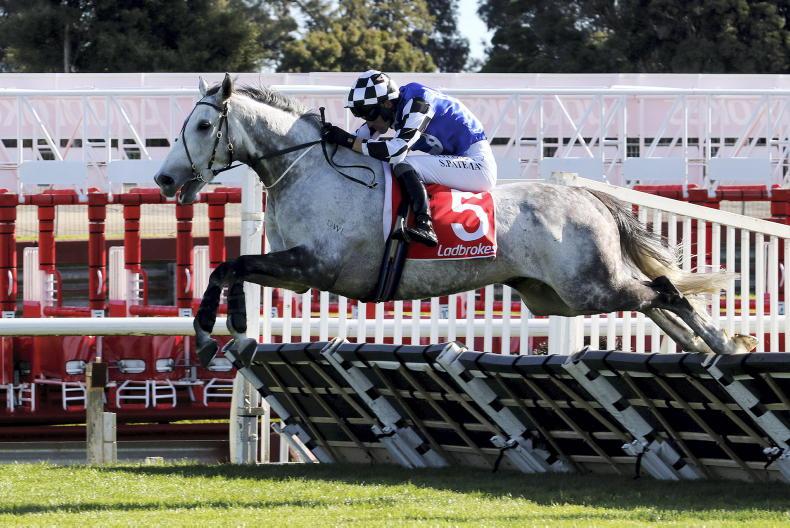 THE French-bred Saunter Boy who failed to finish the 4,200 metre course 12 months earlier, has won last Sunday’s A$300,000 Grand National Hurdle at Sandown.

Sent out with an equal top-weight of 71kgs (11st 2.5lb) in the colours of Australian Bloodstock, Steven Pateman had the ride for the training team of Maher and Eustace.

From the off, Saunter Boy’s only blemish was at the first. Stepping through it lazily, Pateman then got the 10-year-old Myboycharlie gelding back into his rhythm to settle three wide just off the lead.

With the pace easing too much for Pateman’s liking with a lap to go, Saunter Boy replaced the favourite The Cossack at the head of the race.

Pressing on up the hill along the back straight taking on the treble and double, cracks began to appear in the chasing bunch as they endeavoured to make up lost ground on the run down to the final bend.

With a quick look under his armpit at the top of the straight, Pateman held a comfortable margin that proved decisive for Saunter Boy to hold off Willie McCarthy and St Arnicca by a length as Blandford Lad took third.

“I went early on him, he jumped the third last really well and I capitalised on that a bit, and he really wound up and it was a long way from home,” said Pateman.

“I thought, ‘I’ve put all my eggs in one basket here.’ I’ve never ridden a horse that’s just so good at Sandown down the hill.

“I thought I was very lonely after the last, but he had a fight in him anyway. He was great today. Today was the grand final and we got it. You beauty!”

The win brought up a fifth Grand National Hurdle for Steven Pateman and a third straight for the combination of Ciaron Maher and David Eustace.

“That’s what’s so special about the jumpers, they come back year after year and generally, they get better; they get more seasoned, they get stronger, they get tougher and to carry that sort of weight over that trip, it was a phenomenal effort,” said Maher.

“We were talking about it before the race and I said (to Steven), ‘Mate, you know the horse better than I do, just do whatever you want.’

“That’s exactly what he did, you can see he had so much confidence in him.”

THE wife and husband team of trainer Amy McDonald and jockey Lee Horner combined with Flying Agent to land Sunday’s A$150,000 Crisp Steeplechase over Sandown’s 4,200 metres.

“You do it for the good days and this is a great day,” said McDonald. “We haven’t been going that well with a lot of the others, they’ve been pretty basic.

“There’s always one that stands out from the crowd and keeps you going, and that’s him for us.”

Last in the early stages, Horner allowed Flying Agent to work his way through the field before making a move near the top of the hill the final time.

Challenging for the lead approaching the final bend, Flying Agent put the race away after clearing the last in front.

Extending away, the Raise The Flag gelding won by seven lengths ahead of the Irish-bred pair of Yulong Place (Eaton Place) and Valac.

“He was bolting going down the hill, so I was just holding him together, I hadn’t asked him at all,” said Horner. “I just held him until we got around the turn, the rail disappeared, he got up the inside really easy. I was really cautious getting over the last and he was good to the line.

“The track’s probably wet enough for him there today, it’s a beautiful surface, he jumped faultlessly, as he was always does.

“He’s definitely looking more like a National horse this time in than he was last time.”

Flying Agent will now press on to the Grand National Steeplechase at Ballarat on August 28th having now won four hurdles and four steeplechases for just over $410,000 in stakes.