The Underwood Stakes, the Might And Power and the Cox Plate are now the targets for the son of Shocking 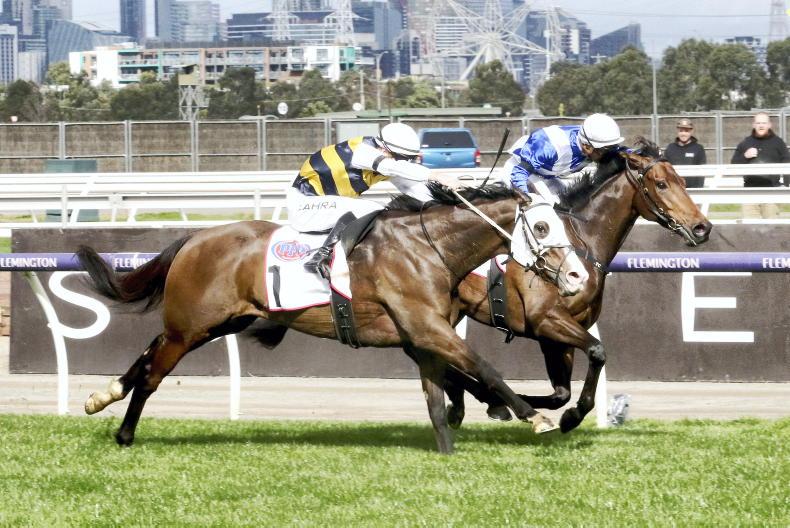 HAVING chased Snapdancer the length of the straight for second place in the Group 1 Memsie Stakes two weeks earlier, I’m Thunderstruck nearly repeated that valiant effort in the 1,600 metres of the Group 1 Makybe Diva Stakes at Flemington last Saturday.

Trained by Mick Price and Michael Kent, I’m Thunderstruck was to the back early on as Alligator Blood set the tempo on the front, and snatched a break on the field in the straight.

Three lengths clear with 200 metres to run, the Stradbroke winner looked to have the race covered.

But with Alligator Blood beginning to tire in the closing stages, the door remained ajar and as I’m Thunderstruck refused to yield, he dug deep to get up in the final stride and win by the barest of margins under Mark Zahra.

“I was honestly thinking to myself thank God these races have good money for second,” said co-trainer Mick Price. “He was pretty brave wasn’t he?

“He was in an awkward spot again, behind heels, and Alligator Blood was off and gone.

“I’ve seen Alligator Blood win some huge races, so I’ve got total respect for him and for us to be able to run that horse down. I just thought it’s a good indicator of things to come.”

By the Melbourne Cup winner Shocking, and the winner of the 2010 Makybe Diva Stakes, I’m Thunderstruck’s margin minimal to the All Too Hard gelding Alligator Blood, the pair three lengths clear of the Savabeel horse Mo’unga back in third.

“He’ll go into the Underwood, into the Might And Power, into the Cox Plate,” affirmed Price of I’m Thunderstruck’s trajectory for the spring.

He is now on the third line of betting for the Cox Plate behind Anamoe and Zaaki.

IN Secret powered to an impressive win the Group 2 Run to the Rose for three-year-olds over 1,200 metres, becoming the first of her sex to win the race and promoting herself to outright favouritsm in the Group 1 Golden Rose on September 24th, also at Rosehill.

Trained by James Cummings, the two-length win by the I Am Invincible filly, over Coolmore’s Snitzel colt Best Of Bordeaux and the Deep Field colt Sweet Ride, did not surprise her stable.

“She’s no oil painting but what she’s got in here (heart) and what she’s got up there (head), that’s what counts,” said Godolphin’s Darren Beadman of the A$900,000 Magic Millions yearling.

“The race set up nicely for her, but she has just been crying out for a dryer track and the team has been very patient with her. She’s top shelf.”

Arguably, In Secret should be undefeated across her four starts having been held up in the Silver Shadow Stakes when second two weeks earlier, though jockey Tommy Berry believes better is on the horizon.

“She doesn‘t look like she’s there yet, but you still get that feel to their action, the way they glide across the ground.

“At the top of the straight when I pulled the stick through to the right, she just took off. That was a pretty good feeling,” Berry continued.

Destroyer back with a home win

DARK Destroyer swamped his rivals to win the first Group 1 of the current New Zealand racing season, the Tarzino Trophy over 1,400 metres at Hastings.

Easy in the market despite his wet track form, the heavy 10-rated track provided few problems for the Proisir gelding who was having his first start back in New Zealand after winning the Group 3 Rough Habit Plate before finishing fourth, beaten just over a length in the Group 1 Queensland Derby over 2,400 metres in May.

Trained by Andrew Scott and Lance O’Sullivan, and ridden by Lisa Allpress, Dark Destroyer won by a length the Darci Brahma gelding Spring Tide, second in this race last year, with the Vadamos mare La Crique in third.

“He looks good now but, in all honesty, he still has a lot of improvement in his coat to come,” said Scott.

“He just hadn’t come up at all since returning from Queensland with the cold air making it hard to keep them warm like he experienced over there.

“He has three weeks to get ready to get back down here again (for the Group 1 Arrowfield Stud Plate, 1,600 metres) and hopefully he keeps going the right way.”