Just one final step...
You must confirm your email address by clicking on the link we’ve sent to your email address.
You are only one short step away from reading 5 free Field+ articles.
Aidan O'Brien leaves six in Irish Oaks

AIDAN O'Brien is responsible for six of the 12 confirmations for the Juddmonte Irish Oaks at the Curragh on Saturday.

As expected, he has taken out his impressive 1000 Guineas and Oaks heroine, Love. Leading his entry is Ennistymon, runner-up to Love at Epsom. He has also left in Irish 1000 Guineas scorer Peaceful, who was a close third in the Prix de Diane, but she is not thought to be a certain runner. O'Brien has indicated that Munster Oaks winner Snow is likely to take her chance at the Curragh, along with Laburnum, who was a close second to the Ger Lyons-trained Even So in an Oaks trial at Naas recently.

Jessica Harrington is represented by Cayenne Pepper. She made a pleasing seasonal debut when finding only Magical too good in the Pretty Polly Stakes.

Donnacha O'Brien has left his Prix de Diane winner Fancy Blue in the race but she is not expected to run.

O’Brien senior has six of the 15 acceptors as he goes for a 14th success in the Gain Railway Stakes. They include Admiral Nelson, who disappointed when favourite for the Coventry Stakes at Royal Ascot.

Romanised, winner of the Paddy Power Minstrel Stakes 12 months ago, could make his seasonal debut in the Group 2 over seven furlongs.

Ken Condon’s five-year-old could face strong opposition with the 16 confirmations including Lancaster House, Speak In Colours and Vatican City.

His trainer Aidan O’Brien has six others in the race while his son Joseph has three, headed by last year’s winner Twilight Payment.

The latter trainer has given Speak In Colours an alternative entry to the Minstrel Stakes in the Sapphire Stakes on Sunday’s card at the Curragh, for which there are 10 possibles.

The five-year-old grey is on a hat-trick after Group victories in the Greenlands and Ballycorus Stakes on his last two starts.

Denis Hogan’s Make A Challenge could turn out again after landing a listed success on this course last week.

Aidan O’Brien’s Mother Earth, third in the Albany Stakes and a subsequent Group 3 winner is one of 15 two-year-old fillies left in the Group 2 Airlie Stud Stakes.

The William Haggas-trained Miss O Connor is among 15 acceptors for the Kilboy Estates Stakes. The five-year-old mare has just had the four starts, winning them all. The latest came at Saint-Cloud in the Group 3 Prix Perth.

Fleeting, New York Girl, One Voice and Ridenza are among her potential rivals. 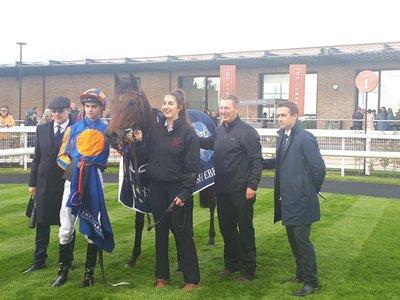